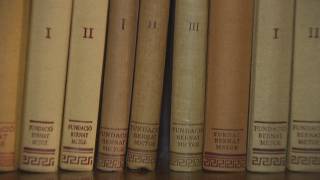 The Col·lecció Bernat Metge, initially presented as the Bernat Metge Foundation’s Col·lecció dels Clàssics Grecs i Llatins, was created in 1922 under the patronage of Francesc Cambó, with the intention of incorporating the works of Greek and Latin authors into Catalan language and culture and facilitating an academic, scholarly and cosmopolitan context for the publication of rigorous critical editions of the ancient texts.

From the outset, the project benefited from the collaboration of renowned writers and expert Hellenists and Latinists. Bernat Metge has never let up in its quest to add to its catalogue of publications since the day it was founded. Its collection of texts includes Catalan translations of most of the major ancient works – Homer, Herodotus, Aeschylus, Sophocles, Euripides, Plato, Aristotle, Lucretius, Catullus, Cicero, Caesar, Sallust, Seneca, etc. Each volume comprises a comprehensive introduction, the established text – Greek or Latin – accompanied by the corresponding critical apparatus and the respective translation illustrated with extensive notes.

Today, the collection contains more than 400 volumes, thus constituting a fundamental contribution to the country’s humanistic culture. The Col·lecció Bernat Metge brought a drive for the rediscovery of the classics to Catalonia in line with that begun in the nineteenth century by the highly respected Bibliotheca Teubneriana and maintained to date. As a result of its longevity and the systematic and consistent nature of its efforts, the Bernat Metge has become one of the world’s largest collections of ancient classics, only comparable to two other collections worldwide: the French Collection des Universités de France, started by the Guillaume Budé Association in 1917; and the English Loeb Classical Library, founded by James Loeb in 1911. Given the dimensions of our culture, this global presence is nothing short of extraordinary and makes the Bernat Metge one of the greatest monuments of Catalan culture and a benchmark in the field of classical translation.

From the time of its creation in 1922, right up until early 2017, a period spanning 95 years and comprising more than 400 works, Francesc Cambó to begin with and his family after him have secured the necessary means to continue this work, with the expert and generous collaboration of Alpha’s team of translators, editors and employees. Since 2017, the ongoing operation of the collection has been assumed by the Som publishing group, which has expressed its desire to continue publishing with the same degree of meticulousness and quality that has always characterised the collection in the past.

The catalogue by author includes works dating from the collection’s first volume published in 1922 right up to December 2016 (in Catalan).